Deprecated: __autoload() is deprecated, use spl_autoload_register() instead in /homepages/39/d648791564/htdocs/clickandbuilds/EspinozaFamily/wp-includes/compat.php on line 502
 Soccer – The Espinoza Family Blog
Skip to content

I am shocked that it’s here.

When we began this blog 6 years ago, I had no idea what to talk/blog about, let alone who’s going to read what I write!?! What do I have to say that is meaningful to those who read this blog?

Someone has been reading my words, most of those people have been family and a few friends. No one else has ever told me they read what I write, besides my own parents and they enjoy it. My father skims through the postings, mainly looking at the pictures and my Mother reads each one through. So someone does read it!

In those 6 years, I have really begun to enjoy blogging. I feel terrible if, I miss a day. This is my journal, about our lives and what we do. Some day, Isabel will be able to look back and read what she did on this and this day. She may even get a few laughs out of it and say, “Hey, I remember doing that!”

What I hope she gets most out of my words/blog, is that I love her very much. I want her to look back and remember those times that she has forgotten when she’s older. So she can sit at her dining room table (eating dinner) and tell her kids about the time she did this and the time she did that. Just like she enjoys doing with Daddy and I now and hearing about when we were her age.

So what I write is for her… remember to have faith, put your hope in Jesus. He loves you more. Laugh and enjoy this website. 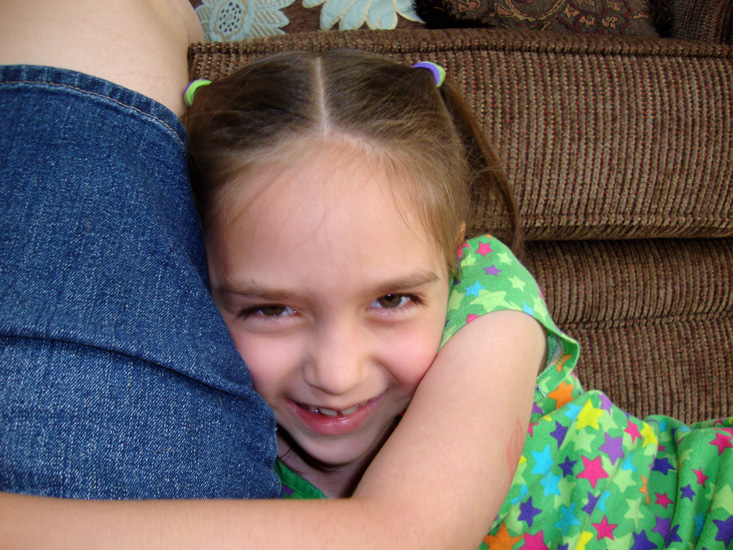 Today was the last day of Soccer Shots for Isabel. I think we might just stick with Tumbling Tykes since she really seems to like that more. 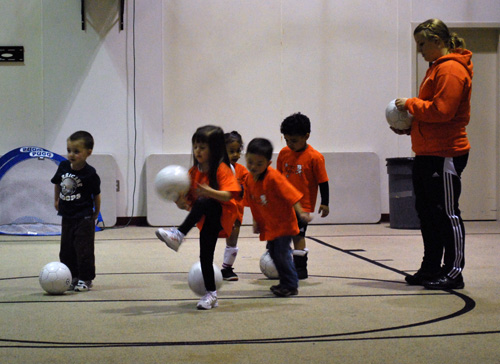 Learning their new move… juggling. Juggling is were you bounce the ball on your knee (or any body part for that matter) several times without touching it with your hands or dropping it. In Isabel’s class however they just had to bounce it once on their knee and catch it. Isabel did an amazing job with this! She was even alternating knees!… left leg. 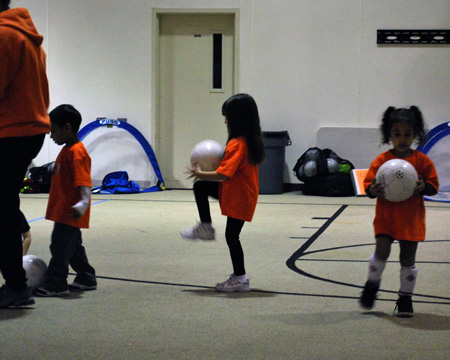 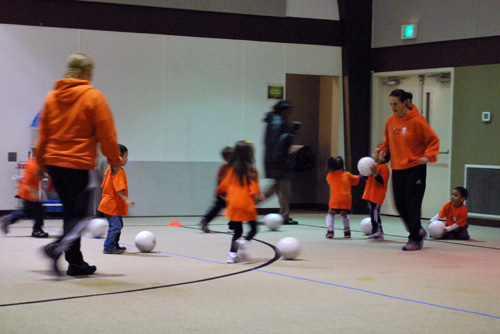 Playing the “Bumble Bee” game and learning another new move, passing. Passing is using the inside of your foot to pass the ball to another player. In the bumble bee game, Stephanie and Niki were hungry bears and the kids were the bees with honey. The kids had to dribble the ball and then “pass” the ball/honey to either Niki or Stephanie. The kids seemed to really like this game… maybe I can practice with Isabel in the yard. She could be the bee and I could be the bear or the other way around! 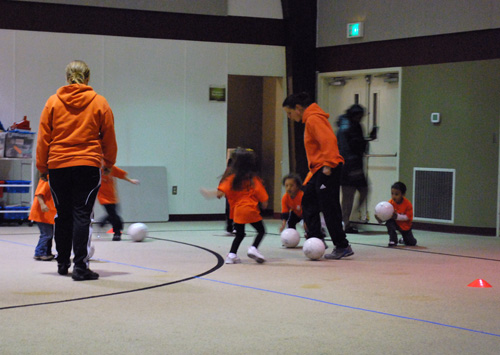 Isabel the bee passes to Niki the bear. 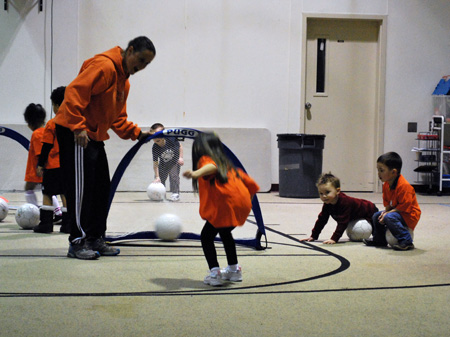 More practice with passing, this time however they had to pass to either Niki or Stephanie and then shoot a goal. Great job Isabel! 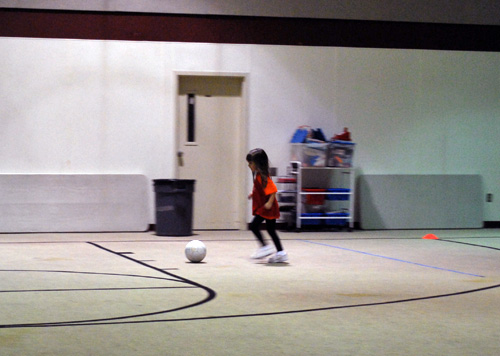 More relay today. Isabel was fast with this today. Dribble and keep that ball in control. 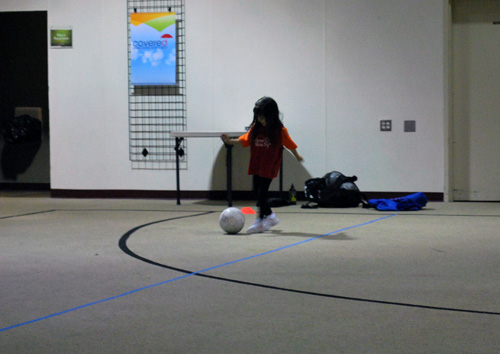 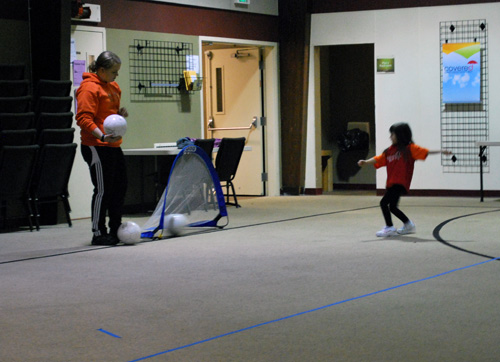 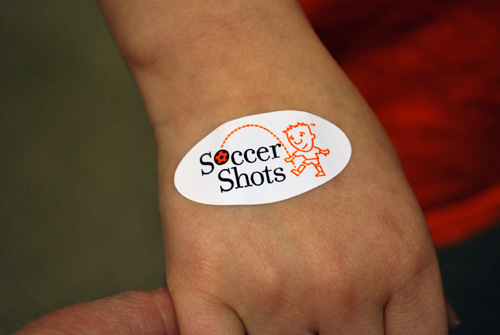 Special stickers for the end of class. Great job!

Today I found some paper in my purse (actually my gum package!) and wrote down notes while I was listening to Isabel’s coach, Niki instruct the team. BTW, if you notice the number of kids in the class has gone down about 5 or 6 kids. So the class seems to be a bit more manageable for Niki, Stephanie, and the other instructor.

This week they warmed-up while dribbling the ball as different animals and practicing the moves that they have already learned; the pull back move, the jump move, and toe touches. Isabel is really great at toe touches, she did 26 one time and then 31 the next time! Way to go, Squirt! 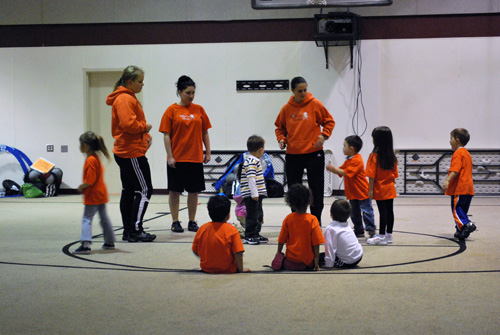 Listening to Niki tell them about their new move: the popcorn move. The popcorn move is moving the ball between the inside of your feet in tiny pops (like popcorn!) while you straddle the ball. The team also learned that when kicking the ball into the goal, you want to kick it with your laces (on your shoes). So glad we got her new shoes with laces! Now she can learn to kick goals with her laces! Awesome! 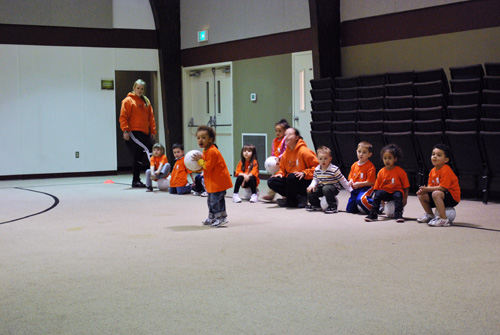 Getting ready to play a game; Mr. Fox what time is it? 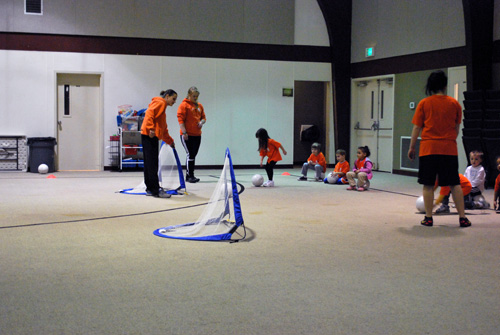 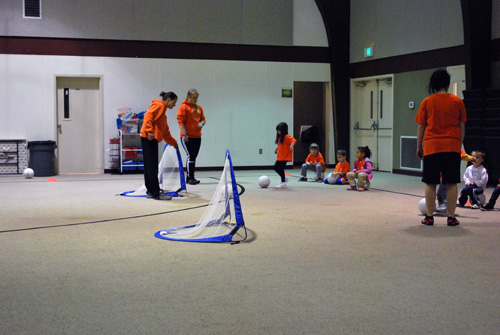 She shoots and scores! 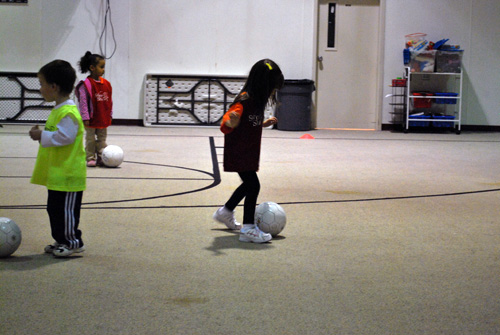 More relay playing; going from one goal to the other dribbling. This week Isabel only made three goals. She was kicking it to hard and it kept getting out of her control and at one point she was fighting for her ball with another player. 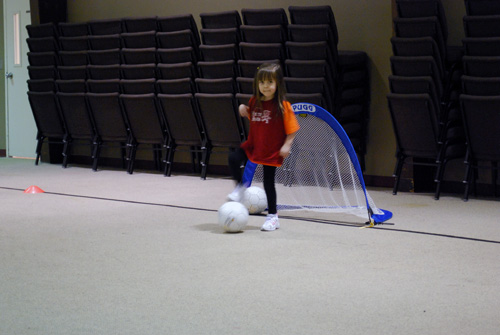 Pausing really quick so I can get a photo! Look at that cute soccer player!

Today’s Soccer Shots class was a review from last week. 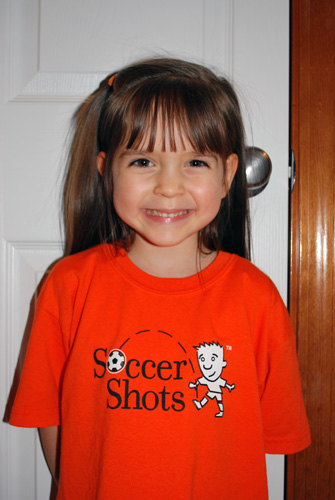 She wasn’t all that excited about the color of shirt (which isn’t purple) and the kid on the shirt is a boy (she’s not a boy!, she said). So Daddy told her that the boy on the shirt was him with spiky hair and all! Way to go Daddy! Now, she’s excited to wear her soccer shirt! 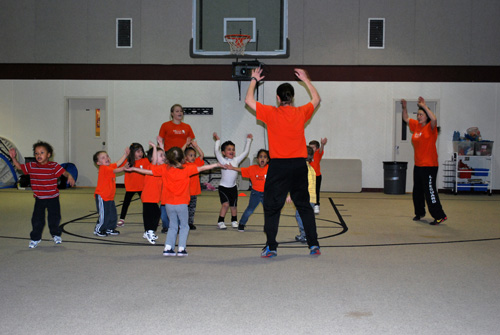 Doing jumping-jacks and other crazy stuff to get warmed up for class. 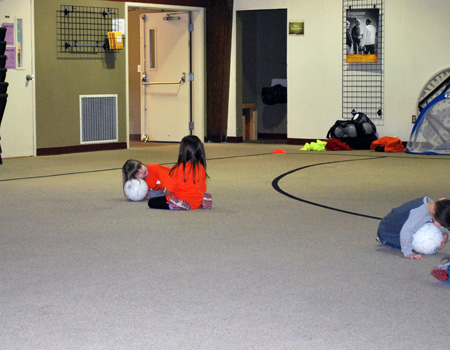 Stopping the ball with your hear. Ezzra did it but Isabel used her hands! 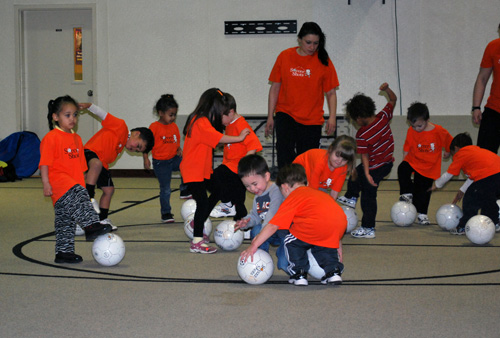 Toe taps with the ball. 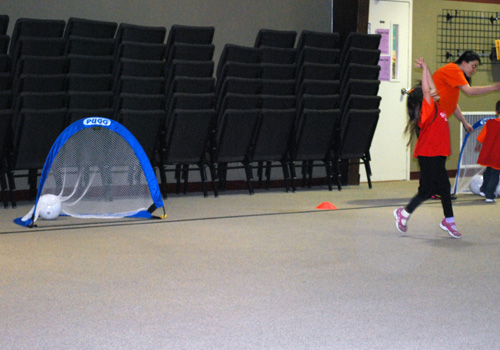 She scored! Hurray for Isabel! Love it. 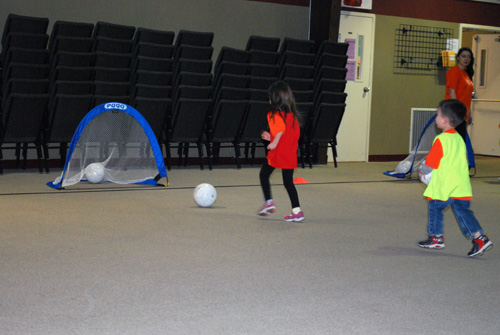 Another goal! After class Isabel said that she made a total of 5 goals. Great job!

Today was Isabel’s first day of Soccer Shots. I was very disappointed when we arrived and realized that the majority of her class is made up of 3-year olds! I had hoped it would be all or mostly 4/5 year-olds. Out of about 20 kids in class, only 3 of them are 4/5 year-olds and that includes Isabel! We’ll see how it goes… the class was a bit hectic/chaotic with the 3 year-olds running around chasing their balls all over the room and not listening to the instructors. Focus was taken off the group as a whole to get the other kids back into the group. Despite that however Isabel listened very well, to both instructors, and did exactly what they told the class to do. She even scored 3 goals and got a t-shirt! 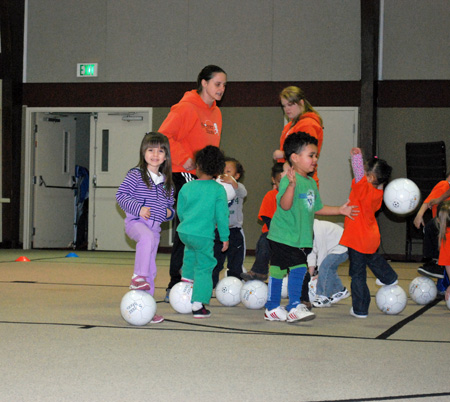 Practicing how to stop the ball with their foot… remember NO HANDS! 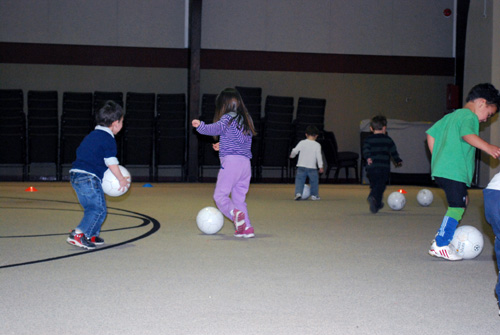 Practicing dribbling and controlling the ball. 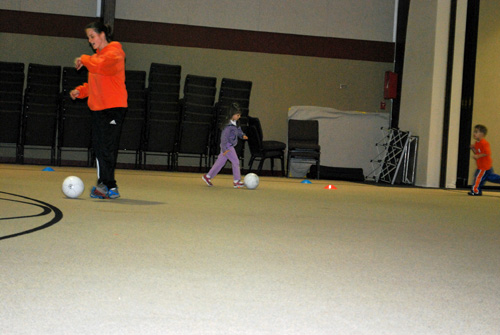 More practice…she went out of bounds a bit but got right back in again. Way to go! 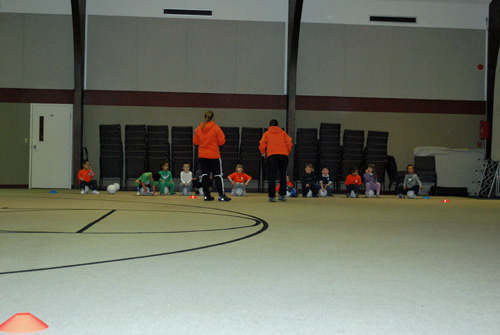 Taking a break, before they break up into 2 groups. 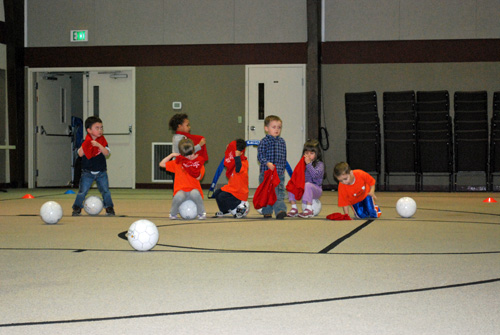 Isabel was on the red team… 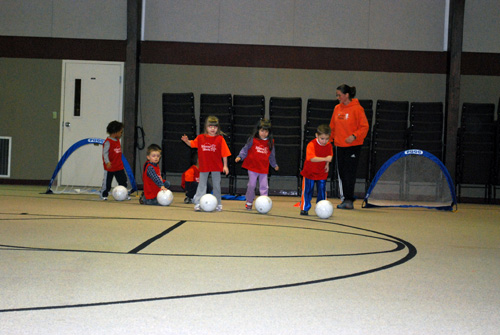 …and their off. Dribbling down to the other net to score a goal. Then they had to run back to where they started and get a new ball to dribble back to the goal. Isabel did this 3 times before class ended. 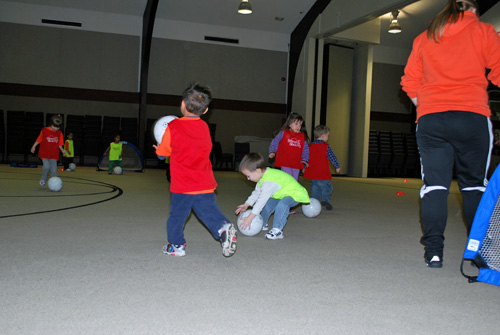 The look of determination on her face… she got it in the net! 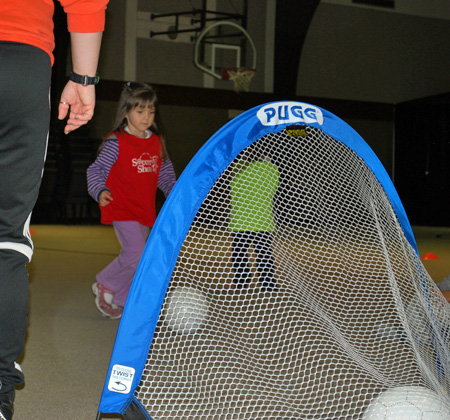 3 for 3 shots… this last one was just before class was over. Great job Isabel!