The clouds broke apart and the sun came out the whole time Isabel was in school. I was so excited, thinking she would get to ride her scooter again around the neighborhood… not! After school the clouds closed up and it began to rain. Bummer! Sometimes I hate living in the PNW, today was one of them!

Not much was said about school today. She did tell me the Bible story is about Moses and Mishy missed class again today.

Chapel was today and Pastor Shawn, from the church, gave the message about the “fruits of the Spirit” listed in Galatians 5:22-23. Which are love, joy, peace, patience, kindness, goodness, gentleness, and self control. Just like real fruit on a tree, we also get pruned in order to bear more fruit. Reading the Bible helps us to learn and grow. 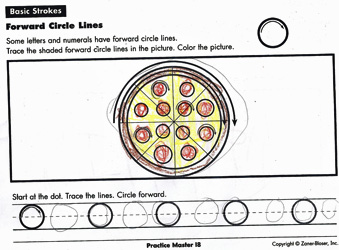 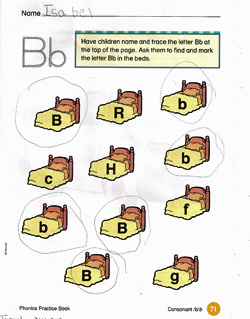 Front: phonics with a “Bb“. 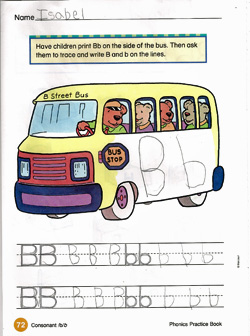 I love how she did her name at the name, it’s perfect and then down below she gets all crazy with the “Bb’s“.

During class today Isabel lost her fourth tooth. She was super excited because it happened at school! She said she was eating her snack when she felt her tooth come loose. She said it was bloody and she went to the bathroom, where another girl helped her wet a paper towel to get the blood to stop. Mrs. Boettcher put her tooth in a small envelope so she could bring it home.

When we stopped for gas on the way home, I was able to get a few photos… 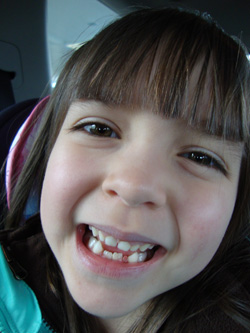 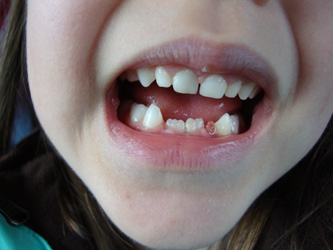 A close-up of her new smile. It’s looking more and more like a big girl smile.

BTW… that bit of flesh poking up is just part of her gum and was back to normal the following day.

Today was a typical Monday morning except I got to school a bit earlier then normal for me to get photos of classroom. 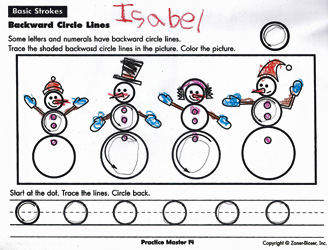 The opening activity; backward circles. I love this picture! She was so focused on it before I left the classroom. Great job! 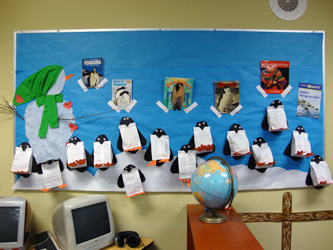 It’s a penguin habitat along the east classroom wall.

I was finally able to get the snowman photographed from the homework assignment from 2 weeks ago. With the winter weather we had, she turned it in on Monday the 23rd and they were hung on Friday the 27th. 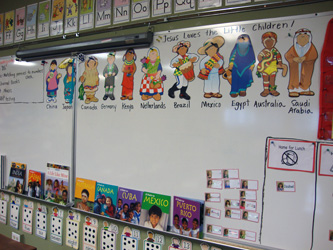 “Jesus Loves the Little Children” front board in class.

Each child “reported” to the whole class, on a different country of their choosing. After going to the library and looking at a huge book with all 280 countries of the world; Isabel choose Denmark as her snowman’s country. 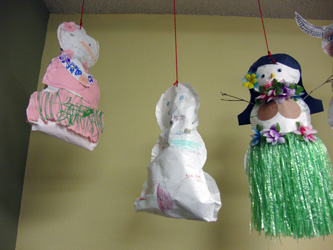 From left to right: Hawaii, Untied States (the whole country), and Hawaii.
(Isabel keeps telling us that Hawaii is a country!) 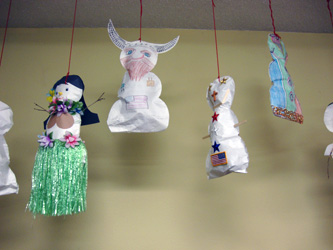 Left to right: Hawaii, Viking, United States, and (not sure). 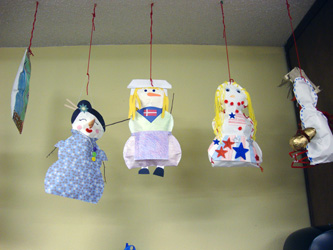 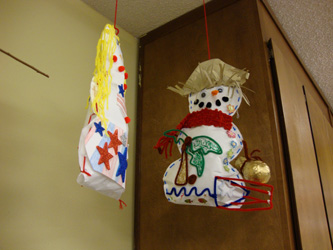 Left to right: Both are United States, just a closer look. 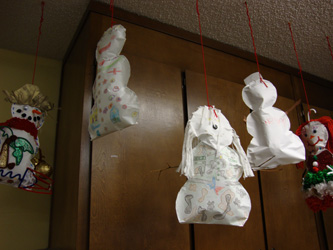 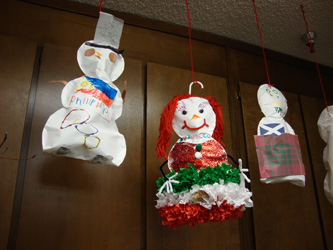 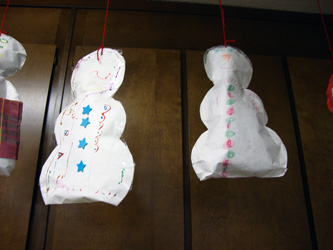 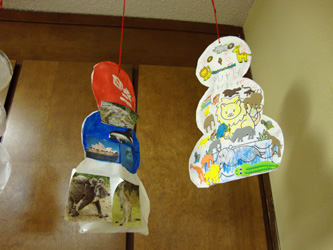 I love them all! The individuality of each one is awesome! What a great way to get kids into early book reporting and research. Isabel enjoyed doing it and gathering research for her country that she choose. We found a small book on Denmark at the library and I went over just a few of the highlights with her about it. A few days after talking about Denmark  for her project, Denmark was in the news, about their queen Margrethe II. Who was celebrating 40 years of reign in her country! We got to watch the carriage procession on T.V. That was cool!

After class Isabel was really excited because her 4th tooth fell out! (see this post)

Nothing else was said about the day, except that she did MAP testing instead of going to recess. For the next 3 consecutive Mondays, she’ll be doing mid-year MAP testing.

No school today, due to teacher work day.

Today was another gorgeous sunny winter day. Clouds were in the air during in the ride to school this morning but by the time school was out the sun was shining.

Today was the last day for the visiting teacher Ms. Nelson. When I arrived at the classroom, Ms. Nelson had the whole class captivated with the reading of the book, “Rumble in the Jungle” by Giles Andreae  and David Wojtowycz.

Thursday’s are PE days. Isabel said they played with scooter’s in the gym. They rolled forward, backward, on their tummy’s and any other way they could get them moving from here to there.

Isabel did mention that while they were singing “This Little Light of Mine”. She got to stand up front and show the class the hand motions.

Nothing else was said about the day.

Isabel has finally decided what she is going to be taking 100 items of, but I will keep it a secret until that day… so keep watch.

The Bible story was the continuing story of Joseph. 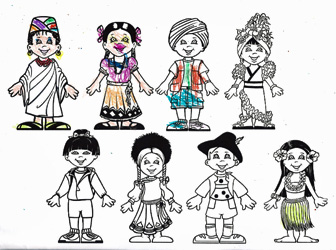 The opening activity was a coloring page of the nations of the world kids. Very cute.

Today was show and tell for the boys. Isabel said she wanted one of the boys toys because it was cool even if it was a boy toy. It was a shark with bracelets on it’s tail and when you added more bracelets to the tail, the shark would flop around. LLiam brought Lego toys.

Recess was in the courtyard, where she used to play last year. She played with some of the balls Mrs. Kelso brought out for the class to play with. She also said she ran out of breath because she was playing tag with one of the other girls in class.

After class we got to stop by and visit with Mrs. W. We haven’t seen her since before Christmas and I was wondering how she was doing. While we visited, Isabel went around the room looking at all the displays in the room. Mrs. W even got a few “grown up” pictures to replace the one on her fridge at home!

This afternoon we worked on math projects for 1st grade. 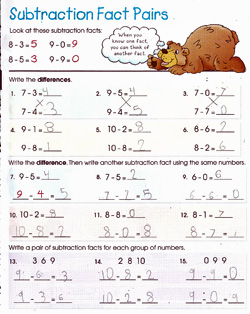 Front. Her number writing is getting better if she remembers which way the numbers go! 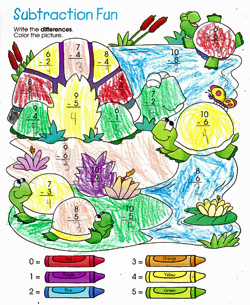 Back. The coloring is fantastic!

Afterward, Isabel got Daisy calmed down (from Daddy being away) by reading her the Bible. She started in Genesis and read half of the first chapter before she stopped. She told Daisy she would read her the other half tomorrow in “class”.

BTW…sorry for the lack of postings I’ve gotten behind on scanning/organizing photos for the blog. I have the postings complete I just haven’t gotten the photos added to the postings. Hopefully I can get it caught up soon…

I was looking forward to another day of sunshine like yesterday but this morning it was back to clouds and rain as we headed to school this morning. Bummer!

Today was Chapel. Isabel didn’t mention anything about it. However I learned later that Pastor Banke, from the Lutheran Church told the story of the “Good Samaritan”. He encourage the kids to be good friends to someone they didn’t know who needed help. Sometimes fear keeps us from being a friend to those around you. Jesus said he will never forsake (abandon) us. He is the best friend we can always have. Let’s love our friends always and grow in our relationship with Jesus.

When I asked her about class she mentioned she didn’t have a good day. After some further digging, I came to the conclusion that Isabel had been bossy with another student in class. We discussed her “helpful” nature and how she can better help those around her without being bossy. I also told her that Mrs. Boettcher and the other teacher’s in class are responsible for getting the other kids to listen. It’s not Isabel’s job. Isabel’s job is to take care of Isabel. We’ve had this discussion before and I hope she begins to understand that people don’t like to be bossed around.

She told me about Taylor’s headband zinging across the room and landing by Isabel’s desk. Isabel said Taylor had been playing with it before it landed by Isabel. She thought that was funny.

Today they didn’t have recess outside again. She said they did exercises in the classroom. She showed me how to do the “washing machine” and several other aerobic exercises.

She did say that she got to give the closing prayer at the end of the day before leaving to come home. I told her that was great! I am so glad that the school has given her these early steps into public speaking, since I never did as a child and am terrified to death to speak in front of any adults.

Today is the first day back to school in over a week! Isabel is so excited to get back into the classroom.

We finished her snowman homework project over the long snow holiday last week and took it with us to class this morning.

After class Isabel told me she got to talk about her snowman project. She had picked Denmark as her project assignment. During one of our trips to the library, we looked at books about Denmark and brought one home to continue reading.

Unfortunately, I completely forgot to take a picture of it before we sent it to class! I need to get in there early one morning and start snapping photos of Isabel’s and a few of the other’s in class.

She told me there was a Hawaiian country in our country. It had a grass skirt but it wasn’t made of grass.

I noticed a Viking snowman when I picked her up from class and wanted to see them all but didn’t want to intrude during class.

Before leaving the classroom, she got to write her name on the tooth chart again! She has been excited to do so since it fell out last week.