This morning was rather cold despite the fact that clouds were hanging around. Luckily I didn’t need to scrap the car windows. When we arrived at the classroom, we were almost the first ones there but Olivia was!

When I went back to pick Isabel up after class, Mrs. W let me come into the classroom instead of standing outside in the cold. The class was just finishing up their snacks and were heading into free-play time. What mayhem!!!!!! I helped pick up trash, push in chairs, got the kids to put things away for circle time, and prayed with the class at the end. Several of the kids seemed glad I was there and were asking me all sorts of questions. 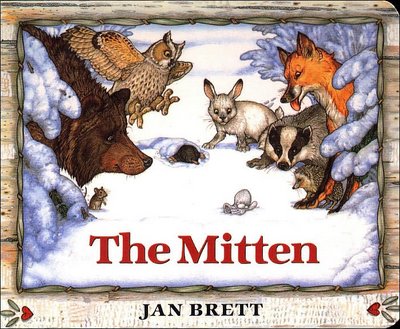 Today, the class read the story “The Mitten” by Jan Brett.

The story is about a Ukrainian boy, who wants his grandmother Baba to knit snow-white mittens for him. However she warns her grandson that a white mitten will be hard to find if he loses it in the snow. Of course he promptly does just that! What happens next is surprising, as a mole takes refuge in the lost mitten, than a rabbit, then a hedgehog, an owl, a badger, and a fox. If your thinking the mitten might be a wee bit stretched out at this point, just wait. A big bear sniffs at the mitten and with all the animals packed in tight, the bear doesn’t care. He crawls in anyway! When a tiny mouse squeezes in, her whiskers tickle the bear’s nose, which causes him to sneeze, “Aaaaaa-aaaaaa-ca-chew!” All the animals fly out of their crocheted cave. As the mitten sails through the air, the boy spots it, reclaims it, and takes it home to show his smiling Baba.

Isabel said that she enjoyed the story of The Mitten. After reading the story, the class worked on a art project making their own “mittens” from the story! 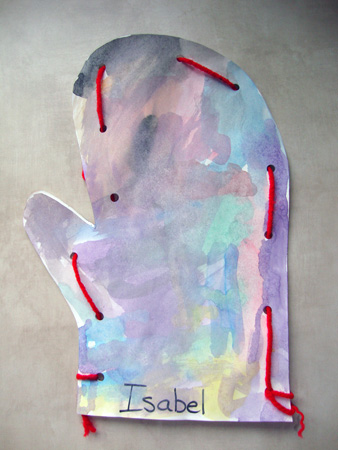 They watercolored the front portion of the mitten and then sewed along the edge. 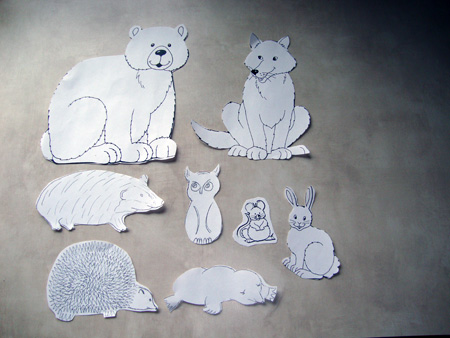 The animals for Isabel’s mitten. I told her that if she wanted to, she could color them.

The class also worked in their alphabet journal’s today. The letter for this week is “O”. Isabel said that while they were doing their journals, she was the first one to finish at her table. She seemed rather proud of herself, I just hope they look like O’s. The Bible story today was about Adam and Eve, again. Isabel said that they have already read that story. I told her that even though they may have heard it before, maybe today’s story was a bit different then before. When I asked further about it, she said she couldn’t remember what it was about. Today, they played outside in the “plain” playground because the other playground was being occupied. Isabel says, that they ran around and chased each other. She also said that she got a stick and was playing in the mud where the gopher holes were. Mrs. W, later told me that Isabel has sticking her hands in the mud and they scrubbed and scrubbed to get all the dirt off her hands before snack time. Just like my child, to be the one to play in the only dirt/mud available in a grassy field!

The special helper today was Anika. They ran out of time in class, because the clock broke, so Anika will share her show and tell on Wednesday with the class. For snack, Anika brought to share, string cheese, Toy Story 3 fruit snacks, and juice. 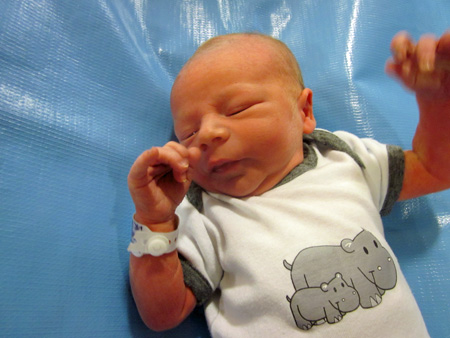 Congratulations to my cousin Alea and her husband Zach on the birth of their first child.

Congratulations to the three of you and Happy Birthday Emmett!

With that said, I am not a parent that follows the “crowd” or the “trend” in toys. I am NOT into buying my daughter princess garbage (Or telling her that she is one! She is NOT!) or Barbie/BRATS/Zombie High junk either. Furthermore, I am NOT into buying boys action figures and cars (I must admit I have bought them as gifts though)! That is ridiculous!

So when Isabel and I were walking the aisles of our local Wal*Mart, we came across some amazing toys… the Backyard Safari collection. These toys are awesome! We purchased the Backyard Safari Binocs (for viewing birds and such in trees), Backyard Safari Spy Glass (for looking at tiny bugs BIG), Backyard Safari Critter Shack (for housing lizards, frogs, and other creepy crawlies), and the Backyard Safari Scoop Net (for keeping our hands safely away from hurting our bug friends)… which leads to my post… our friend Jimmy is turning 5 this weekend and instead of buying a pre-made card, I decided that Isabel and I would make an original! Besides our gift went with the “theme” on the card…bugs! I did the layout and word design. Isabel did the artwork and sticker placement (with a little help from me). Enjoy! 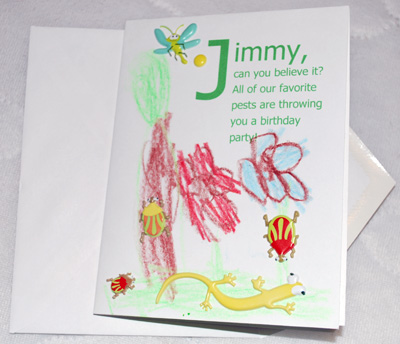 The outside of what Isabel calls…”bug party”. 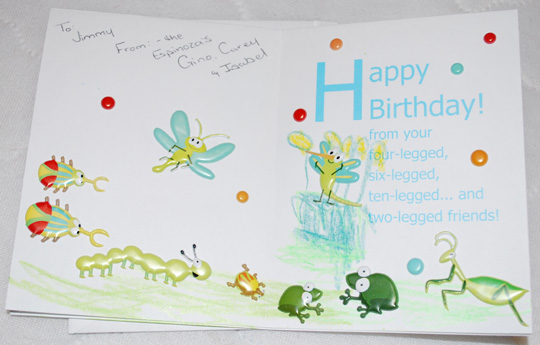 Inside of our “bug party” card. I love the bug on the cake!
Happy Birthday, Jimmy!

No school today due to a teachers work day.

Our month just got a whole lot busier! The school is offering what they are calling enrichment classes for her age group only, Soccer Shots and Tumbling Tykes, outside of the normal school day. Each class will be held weekly during the month of February. We decided to get Isabel signed up for both; to get her more involved with kids her age and to see what she would actually like to do for a “sport”. So be prepared… I’ll be adding more photos throughout the month ahead!  Her first “class” is on the 1st! Enjoy! 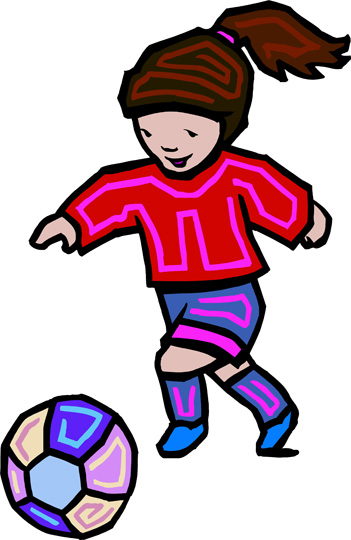 Soccer Shots will be an introduction class to soccer. Isabel will learn basic soccer, be encouraged in team play and build her character. This class will be held on Thursday afternoons during February. 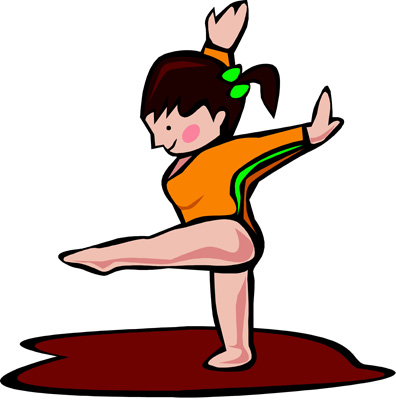 Tumbling Tykes will be an introduction class to gymnastics and tumbling. Isabel will learn about healthy choices, balance and coordination. This class will be held on Tuesday afternoons during February. I’m looking forward to seeing her in both classes and how she participates in each. She’s very excited about the soccer class, but we’ll see which one she really likes…I’ll keep you posted!

I think this morning Isabel would have rather wanted to stay in bed or snuggle with me. She just didn’t have the energy to get going however we did make it to school on time. It looks to be a nice day out with maybe some sunshine poking through the few clouds that are out there hanging around. 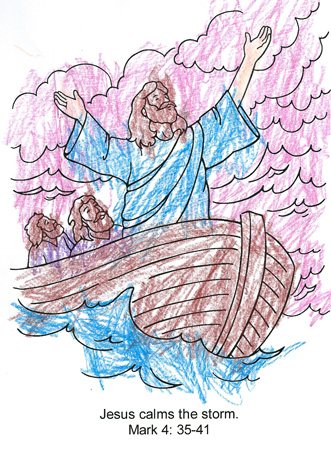 Today, in class the Bible story came from Mark 4:35-41 and was about Jesus calming the storm. Isabel said her favorite part of the story was when Jesus was sleeping on the boat and when all the people were gathered around him to wake him up. 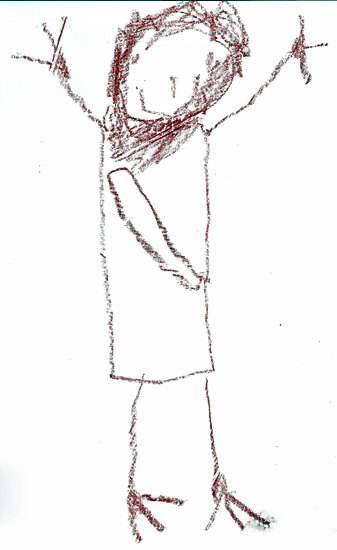 This is Isabel’s version of Jesus calming the storm. 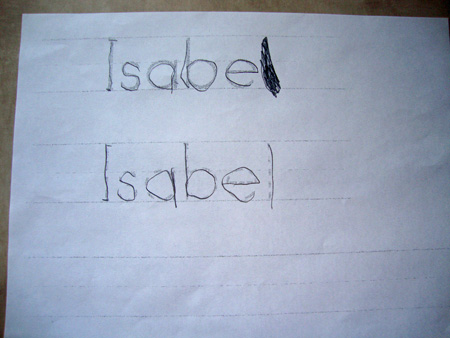 I had to share her name writing page today. I was very impressed with how well she did and when I commented on it. She told me that she made the “l” to look like a pickle! Silly girl! 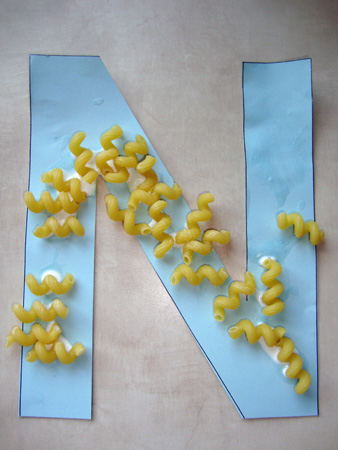 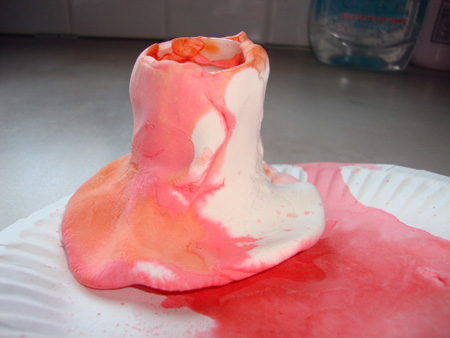 This is her completed volcano from Monday’s class! They used vinegar and baking soda to get it to “erupt”. 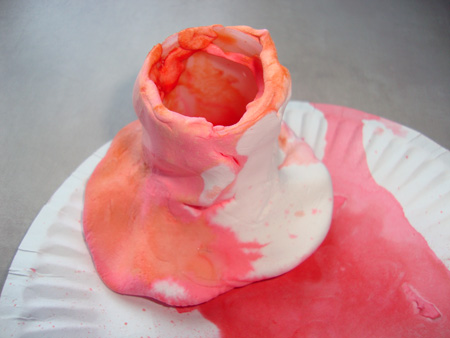 Isabel said that she didn’t want to make her volcano “erupt”, so with the help of today’s Mommy helper, she got it to.

The special helper today was Aiden. For show and tell, he brought a Buzz Lightyear and Woodie interactive action figures. Isabel said she saw that before so she wasn’t all that interested and I told her that it is important to Aiden because he brought it to class, so you need to show him respect and pay attention while he’s talking about it. Even if you’ve heard/seen it before, maybe Aiden has something new to say about Buzz and Woodie. She didn’t say much after that, so hopefully next time she’ll give it some thought if it’s something she’s seen/heard before. For snack Aiden shared with the class, breakfast bars and apple juice.

I was going to be the Mommy helper in class today but after eating a bowl of cereal with Isabel this morning, my stomach got upset. Evil hamburger!

Isabel really didn’t tell me anything about her day at school. She mentioned that they made volcano’s out of cups and white homemade molding clay and said they are going to finish them later. They worked in their alphabet journals, with the letter “N”. I have forgotten about their journal writing, which is done each Monday with the letter of the week. When I asked her again later what she did today, she told me it was a secret. So this is it!

Today’s special helper was Devan. For show and tell, he brought a yellow car that made noise. For snack Devan shared with the class string cheese and juice.

No school today. The class went to Build-a-bear in the mall but unfortunately for Isabel she did not get to go because she disobeyed Daddy and Mommy.